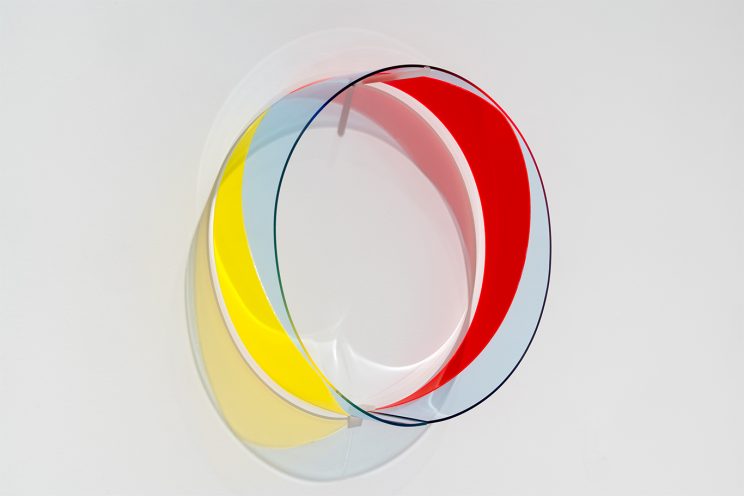 This work is part of a recent body of three-dimensional works in which Trudel continues her exploration of colour and transparency. The geometric composition of the piece harmonizes material and light to allow the colour to filter through. Within the sphere of the hoop, a luminous degradation mysteriously appears. Created using fluorescent Plexiglas—whose edges project light—the painting results from a rigorous artisanal process, discovered during the artist’s experiments on plastic. The support is successively cut, assembled, polished, and thermoformed. The result generates a visual complexity that reflects our era in which the screen is omnipresent.

A conversation between artists Marie-Claire Blais, Julie Trudel and Caroline Monnet about the edges of space, colour, material and tradition in practices that push painting beyond control.

For her third solo exhibition at the gallery, Julie Trudel presents a series of new tridimensional paintings, continuing her previous exploration of color in transparency. It was during a residency in Berlin in 2015 that she first discovered a model of fluorescent plexiglas of which the borders throw light. All while keeping the constraint she imposed on herself in 2012 to paint exclusively in black and white, it’s through the support that she has reintroduced primary colours into her work.

The geometric compositions of the paintings blend matter to light to show color. Veils of translucent acrylic paint subtly change the shade of the panels and their level of transparency. Trudel attains this result by means of a rigorous artisanal method, discovered through experimental trials on plastic. The support is successively cut, polished, assembled, painted and thermoformed to create folds at precise angles. Through these interventions, Trudel is able to liberate the Plexiglas of its semiotic boundaries heavily associated with industrial plasticity, to bring it into the pictorial field. The result generates a visual complexity that reflects our era of omnipresent screens.

The artist would like to warmly thank l’École des arts visuels et médiatiques and the Faculté des arts of UQAM, the Canada Council for the Arts and the Joseph Plaskett Foundation for the financial support of this project. She would like to highlight the precious and tireless contribution of her skilful, intelligent and reliable studio assistant Éloïse Carrier. The technical support of David Allard Martin, Mario Baillargeon, Danny Glaude, Olivier Heaps-Drolet, Ianick Raymond and Jean Talbot were also essential to realizing this body of work. 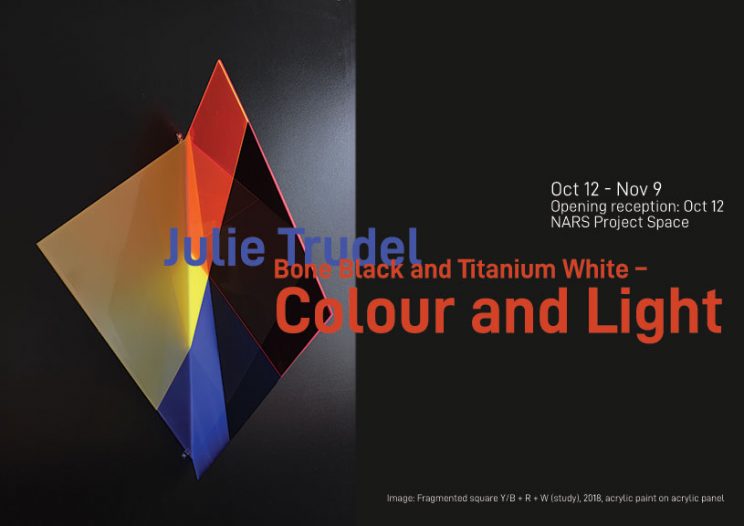 Having reduced my palette to black and white in 2012, I am trying, since 2015, to include ambient light in my work, by painting on clear acrylic supports (commonly known as plexiglass), using this material’s transparency, reflective properties, reversibility and plasticity. By adding light to the traditional aspects of abstract painting, I seek to create a visual complexity that speaks of our time in which the screen is everywhere. In this new project, I tried to reintroduce colour in my work, by ways of the support. I was seduced by primary coloured fluorescent plexiglass that throws light on its edges.

The challenge was to create a fascination for colour and light that would be mainly pictorial with this material heavily associated with design. Thus, I used the plexiglass as if it was the paint: paying close attention to the specific effects occurring in the material. To make the most out of it, I have given up patterns to favour gradients that occur when a thick coat of acrylic paint gets thinner and let the colour of the panel appear. These gradients alter the colours, make the panels opaque and reduce the quantity of light that gets through them.

I created 3D paintings that hang to the wall but juts out into the room to catch surrounding light. Contrasting coloured panels overlap, creating new colours, light effects, and veils. The wall itself, painted black under some paintings, changes their hue and enhance this layering. Reversible, the paintings look contradictory when seen from different sides. However, one can easily mentally deconstruct their components, entirely exposed. This power of a painting to create an illusion, even when its material reality lay bare, is an important part of this project. Between transparency and opacity, illusion and objecthood, these paintings embody contradictions.

My warmest thanks to École des arts visuels et médiatiques and Faculté des arts of Université du Québec à Montréal, the Conseil des arts et des lettres du Québec and the Joseph Plaskett Foundation, who supported the development of this project. I would also like to acknowledge the contribution of my skilful, intelligent and reliable studio assistant, Éloïse Carrier, as well as Danny Glaude, David Allard Martin, Jean Talbot and Mario Baillargeon, who helped resolve many technical challenges. Thanks to NARS Foundation for the opportunity to show this work. 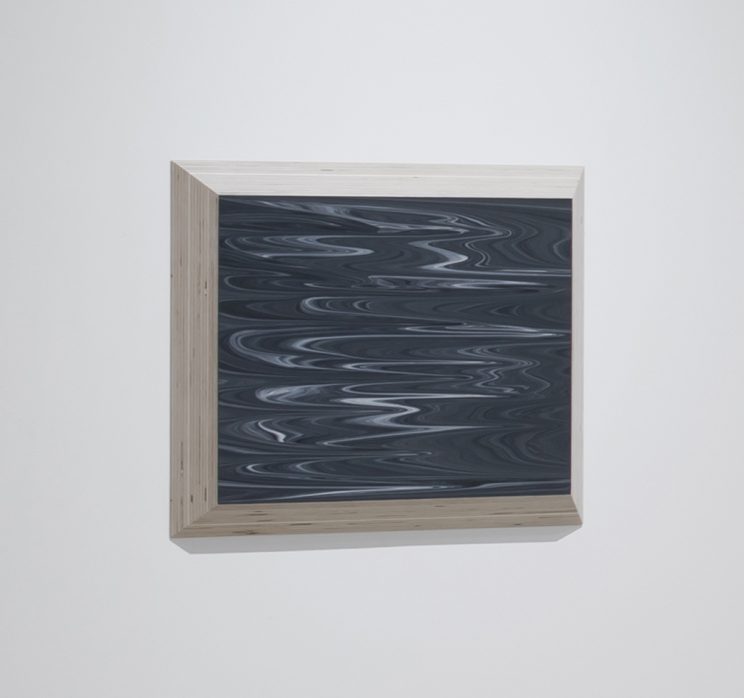 Le Magasin is delighted to start this new year by a group show looking back at the last 3 years of editions printed by À l’affiche project.

Thanks to the artists and Galerie Hugues Charbonneau.

Entangled: Two Views on Contemporary Canadian Painting offers an insight into two distinctly different modes of painting that have come to dominate contemporary painting in this country. The origins of both can be effectively traced back to the 1970s, to a moment when the continued existence of painting was hotly debated. Within that debate two new strategies were devised, one that proposed the possibility of conceptual painting—a highly refined notion of painting that emerged from and returned to the idea—and a second, ambivalent proposition that valued actions and materials over ideas—in short, doing and making were pitted against ideas and concepts.

This exhibition traces the legacy of that debate and documents the work of 31 artists who have been largely responsible for the strong revival that painting now enjoys in this country. With work by artists from Halifax to Victoria and many places in-between, this exhibition offers a convincing survey of the lively debate that makes painting relevant and meaningful today.

It is with great pleasure that I am joining the École des arts visuels et médiatiques at Université du Québec à Montréal as Assistant Professor. In addition to enjoying this unique opportunity to develop my practice and to share my passion for painting, I am heartened to join such a wonderful team for the long term. I attach the utmost importance to the spirit of research, the commitment, the generosity and the professional rigor embodied by my future colleagues. I hope to contribute to that spirit for a long time, little by little, growing year by year.

As part of “À l’affiche”, a fundraising project by Arprim, I sought to translate into silkscreen my interest for the constraints and for the materiality of the medium.

The launch of this limited edition of 25 silkscreen prints was held on November 30, 2016.

The prints are for sale, for the benefit of Arprim, while supplies last.